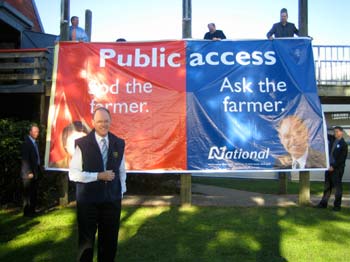 As Reserve Bank governor in 2001, Don gave a speech to the Knowledge Wave conference laying out his plan for restoring New Zealand's living standards.  Less than a year later, he was in Parliament vigorously advocating the need to close the income gap with Australia.

Just 15 months after entering Parliament, he was elected Leader of the National Party and in that capacity was Leader of the Opposition, a position he held for a little over three years.

The need to reverse the gradual decline in New Zealand’s living standards relative to those in countries to which New Zealanders can readily move by getting the right policies on taxation, regulation, and infrastructure;

The importance of reminding New Zealanders that the Treaty of Waitangi did not promote one race above another, or entrench a right to separate Parliamentary representation, but rather guaranteed all New Zealanders the “rights and privileges of British subjects”; 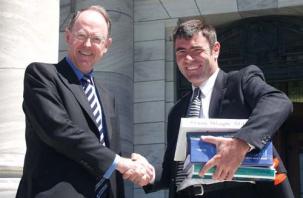 The need to reform the welfare system, to avoid the demoralising effects of entrenched dependency;

and the need to ensure that all New Zealanders can feel secure – secure from external attack and from internal crime.

These themes resonated with many New Zealanders, with the result that National’s share of the party vote almost doubled from 20.9% in the 2002 election to 39.1% in the 2005 election, National’s highest share of the vote since the First Past the Post election of 1990. 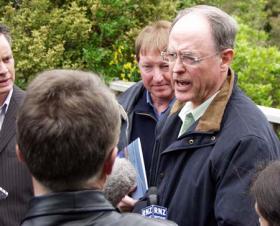 Speech to Zonta Club in Christchurch

Speech to the annual conference of the New Zealand National Party, Christchurch

Fourth and final speech to the Orewa Rotary Club; this one focuses on economic policy

Speech to North Shore Rotary Clubs reassures retirees and those nearing retirement that their NZ Superannuation is safe, but notes the inevitability of some changes in the scheme in the longer term

Pay Off Time For The Unions

Law and Order: A National Prority

An address to the Sensible Sentencing Trust

Mr Chairman, as everybody in this room knows, inadequate transport infrastructure is one of the most serious obstacles to New Zealand’s achieving the faster rate of economic growth which we need if we are to have the slightest chance of reducing the gap in living standards between this country and Australia.

The speech which, for a time, changed "Orewa" from a place to a date, outlining the dangerous drift to racial separatism in New Zealand and the development of the Treaty grievance industry

Speech notes used in the General Debate in Parliament

A Nation in Peril

An address to the ACT Upper South Regional Conference, Christchurch

Where to From Here?

Why are Schools Failing so many of our Kids?

An address to the Visionschools annual conference

Why I went into Politics

An address to the Auckland Rotary Club

Where to From Here?

An address to the Orewa Rotary Club